In November, the Attorney General’s Office, the Colombian Navy and the US Drug Enforcement Administration (DEA) arrested 11 alleged members of an organization specialized in the manufacturing of submarines and adapting other vessels for the purpose of cocaine trafficking.

The network operated in the departments of Cauca, Valle del Cauca, Nariño and Chocó, where the arrested members obtained building materials, built the vessels, and coordinated logistics with different groups to move the drugs abroad, mostly to Mexico.

According to a press release by the Colombian Navy, the network maintained an agreement with the National Liberation Army (Ejército de Liberación Nacional — ELN), under which the criminal group provided security in rural areas along the Cucurrupí river in northern Colombia, where the network built submarines.

However, a statement by Colombia’s army also indicated that the submarine builders had achieved enough fame that they had also been contacted by criminal groups in Mexico and Guatemala to build vessels for them. 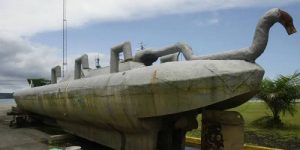