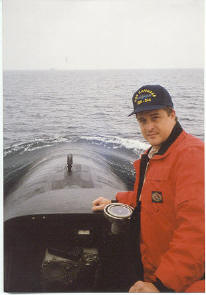 1999 aboard the submarine USS Houston

Founder and Senior Editor of SUBSIM, an online gaming magazine since 1997.

An American Tragedy ~ Theodore Dreiser    Oh Clyde, how could you betray poor, sweet Roberta? A tremendously moving work of psychological exploration; Clyde is a lower-class youth who yearns to find his place in the sun and escape the crushing poverty of his time. His quest is nearly complete, wealth and leisure are in his grasp, when fate intercedes.

Of Human Bondage ~ W. Somerset Maugham    Ever had trouble deciding what to be when you grow up? Can't tell art from pretentious self-promotion? Dig into this masterpiece and witness Philip's struggle against immaturity, indecision, and the monstrous Mildred.

Clear The Bridge! ~ Richard O'Kane   The WWII war journal of America's most decorated submarine captain. O'Kane was the protege of Capt. Dudley "Mush" Morton, and went on to command the USS Tang. O'Kane took the fight to Japan's doorstep, sinking more ships than any other sub skipper. Aaoooga!

The Color of Light ~ William Goldman    The most stunning scene of epiphany I've ever encountered! Finally, a novel that quietly whispers the most basic of truths: Regret is sometimes the best we have to hope for. Alas!

Conan the Barbarian ~ Robert E. Howard    Yes, adolescent fiction, but for a 10 year old boy, it's very good material--and I was once a 10 year old boy. Howard's dark heroic fantasy set in a quasi-logical pre-Grecian world of his own creation was instrumental in sparking my desire to read, to learn about the world over the horizon, to strive.

The Guns Of August ~ Barbara Tuchman    She's no longer with us, but her powerful works remain. This particular book details the collision of European ambitions and egos that produced the greatest war the world of that time had ever witnessed. One must include this volume in their library.

Anna Karenina ~ Count Leo Tolstoy    An epic of one young woman's personal struggle to find love that leads her to flaunt the social mores of her times. Her husband reacts with subtle and devastating retribution. This novel contains many insightful characters, among whom is Konstantine Levin, the soulful nobleman who sleeps in the harvest field among the stars. Unforgettable!

Joy Luck Club
Return of the Native
Les Miserables
To Kill a Mockingbird
Breakfast of Champions (anything by Kurt Vonnegut, Jr)

Any comments about the above works of literature are welcome! 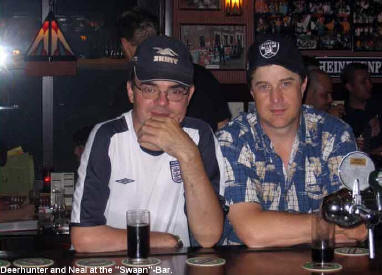 2005 - Friend Richard and Neal in a pub in Amsterdam